In July 2014 The Universal House of Justice made significant changes to the The Bahá’í Calendar. This page describes the Bahá’í Calendar as it currently exists.
The Bahá’í Calendar is known as the Badí‘ Calendar. It is a Solar calendar which means it is based on the revolution of the Earth around the Sun.
In order to understand the calendar it is helpful to understand the astronomical concept of a Vernal Equinox. Solar Calendars need to have a fixed start time – a “beginning” of the year. This “beginning” of the year can be calculated down to the second and it is logical to relate it to the time of the Vernal Equinox. As the Earth revolves around the Sun it spins on its own axis making one revolution every 24 hours but this axis of rotation is not perfectly vertical with respect to the plane of the earth’s orbit; it stays at a fixed angle of 23.5º with respect to space.  Due to this fixed 23.5º tilt of the axis as it orbits, we can say that sometimes the axis of the earth is tilted toward the sun, and sometimes it is tilted away from the sun. As this happens, the sun will either be above the equator or below it but at a certain instant in time it can be said to have “crossed” the equator . See the image below:

This point in time at which the sun “crosses” the equator is called an “equinox“; and since the earth is rotating on its own axis, this time differs for different locations around the globe. The Equinox at springtime is called the Vernal Equinox. Astronomers can determine the exact time at which this event occurs for any location around the globe. By House of Justice decision, the Bahá’í Calendar begins at the time of Vernal Equinox at Tehran, Persia. In relation to the Western Calendar, the day on which this event occurs can vary from year to year: it always happens on March 20 or March 21 of the Western “Gregorian” calendar. This Vernal Equinox at Tehran is the first day of the Bahá’í Calendar each year and the date of all the 19 Bahá’í Months and of all the Holy days – except for the Twin Holy Birthdays – are directly related to the time of the Vernal Equinox.

Baha’u’llah was born in 1817 in Persia. The Persians used the Islamic Lunar calendar. This Lunar calendar was -and is- based on the revolutions of the moon around the earth and in this Lunar Calendar, the first day of the month is based on the ‘New Moon‘.  The time that this ‘New Moon’ becomes visible to the naked eye can sometimes vary for different locations and from year to year.   Also, since the Islamic Calendar is not tied to the orbit of the earth around the Sun, a month in that calendar can -and does- occur in different seasons of the year and there is no relationship between the months of the Lunar Calendar and the months of a Solar Calendar such as the “Gregorian” or Western Calendar.

In 1817, of course, the Vernal Equinox occurred on (or about) March 21, 1817. The Birth of Baha’u’llah occurred on November 12th 1817; according to the Islamic Lunar Calendar of that year, this was the 2nd of Muharram. From the time of the Vernal Equinox of 1817 there had been 8 Lunar months (or “New Moons“) to the first day of Muharram. So in basing the time of the “Twin Holy Birthdays” on a period of eight “New Moons” after the Vernal Equinox of any year, the Universal House of Justice is fixing the celebration at the same distance in time from the Vernal Equinox as it was in 1817 at the birth of Baha’u’llah.   However since the moon could be anywhere in its orbit at the time of the vernal equinox, the exact number of days in this “eight new moons” interval can vary considerably and so the dates of the “Twin Holy Birthdays” will move from year to year from mid-October to mid-November.   Some kind soul has created a graphical diagram showing this variation graphically for the years 2015-2065.
For more details on the Islamic Calendar see this page on the US Naval Observatory Website.

General Summary of the Calendar

Currently, one of the easiest ways to see the Bahá’í Calendar for any year is to go to the website of an individual Bahá’í Jeffrey R. Brown who has created a cloud calculator to calculate the calendar for any year through the next century.  A table prepared by a committee at the Baha’i World Center can also be used.   In general, the way the calendar now works may be summarized by the following rules:

Vernal Equinox for the next 25 years

The table below shows how the date of the Vernal Equinox changes (with respect to the “Gregorian” calendar) over the next quarter-century and the corresponding start date for ‘Ala, the last month of the Baha’i year which is the month of fasting: 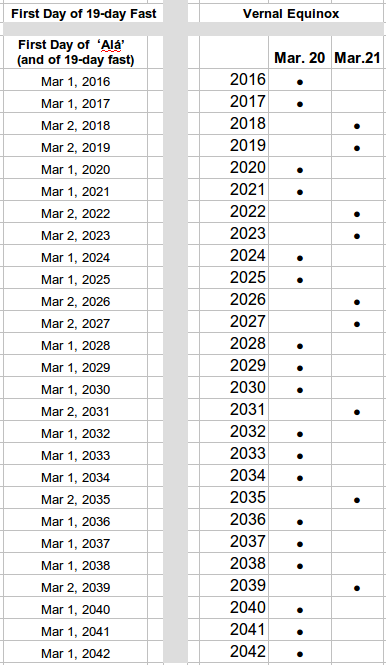 Once the date of the Vernal Equinox is known, the Calendar will follow one of two patterns.  See the tables below to find the calendar for any year – except for the Twin Holy Birthdays and the Intercalary days. See the table above for the start date for the month of Fasting (‘Ala). 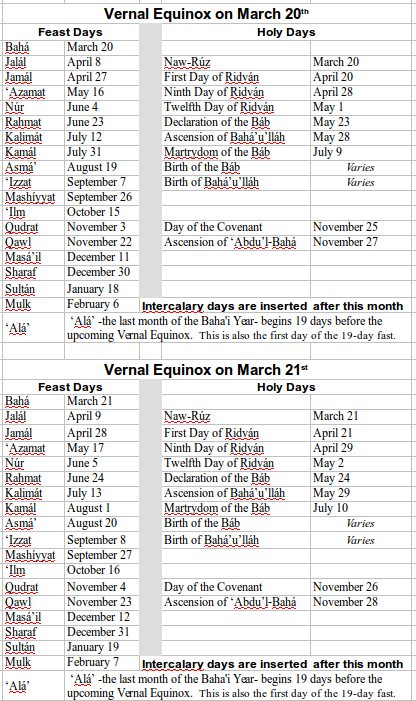 The information from the above two tables is also available in an Excel Spreadsheet Document (Click here to download it).
The table below shows the dates for the Twin Holy Birthdays by year:

From the Bahá’í Writings

…in every age, the reading of the scriptures and holy books is for no other purpose except to enable the reader to apprehend their meaning and unravel their innermost mysteries. Otherwise reading, without understanding, is of no abiding profit unto man.

Research conducted by the Indore Bahá’í Chair in collaboration with ISGP highlights the need to view human prosperity as an outcome of material and spiritual progress.

Concerned with the state of their neighborhood, youth in Bahá’í community-building activities draw on government support to remove 12 tons of trash from a local river

A video program produced by the Bahá’ís of Azerbaijan features profound conversations on topics such as the equality of women and men and the role of media in society.

Malaysia: Promoting unity in a land of great diversity

The Bahá’ís of Malaysia have been fostering constructive dialogue among a cross-section of their society about how all people can contribute to greater social cohesion.

The walls of the east and west sides of the plazas have now been completed, marking a new stage of construction.

“United in its embrace”: Chiefs in Vanuatu reflect on temple’s unifying role

As anticipation builds for the completion of the Bahá’í House of Worship, chiefs and local leaders convey feelings of joy and a strong sense of hope for the future.

“Through the lens of human dignity”: BIC looks at media’s role in fostering unity

Journalists meet to explore how news media can build unity, as part of the BIC’s wider efforts to contribute to the discourse on the role of media in society.

Youth engaged in Bahá’í community-building efforts are inspiring their peers with music that responds to social issues heightened during the pandemic.

Campaign calling on Iran’s government to end hate speech against the country’s Bahá’ís draws unprecedented global support from many segments of society.

A significant milestone has been reached with the completion of the superstructure, as the site of the House of Worship begins to receive groups of visitors.

Examining interplay of culture and gender equality in Turkey

The Bahá’ís of Turkey are bringing together a cross-section of society to examine the spiritual principle of gender equality as a basis for social transformation.

Annual conference of the Association for Bahá’í Studies draws thousands of participants, stimulating rich discussions on a wide variety of topics.

“It is appearing before our eyes”: Emerging DRC temple inspires growing numbers to action

Although in its early stages, the Bahá’í temple is giving rise to greater action aimed at the material and spiritual progress of society.

“A significant experience in our country”: Faith leaders in the UAE foster coexistence, build unified vision

A unique forum initiated by the Bahá’ís of the UAE is bringing together religious leaders for profound discussions about the role of religion in society.